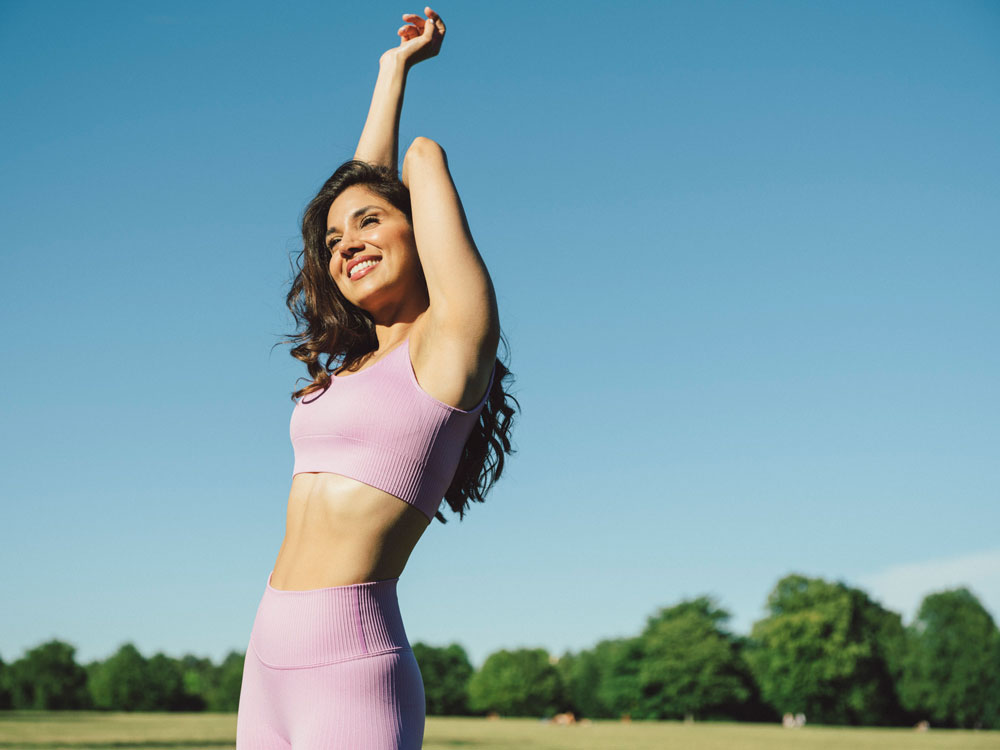 Growing up I had a chip on my shoulder about proving to myself and those around me that I could achieve success when it came to my career.

And after University, I found myself juggling two jobs. During the day, I was a regimented English/Spanish language instructor and by night a bubbly VJ on a live TV show. The positive feedback from my students and TV audience compensated for my 14 hour days and tight schedules. Not to mention the 5 hours sleep every night, bad skin (which of course my makeup artist could easily cover up with a foundation stick) and bad mood swings with my parents. All this compounded with an unhealthy diet ultimately led to several bouts of sickness. I remember so clearly teaching my classes whilst my insides felt on fire.

A year and a half later, when I felt my learning curve stagnate, I decided life had bigger plans for me, so I quit my jobs. That’s when I contracted typhoid (salmonella to be specific). After being bed-ridden for a few weeks, I was convinced that I was stronger than my illness when I received a job offer from L’Oréal. Looking back it was probably one of the best feelings I’ve had (minus the being sick!). They were just establishing themselves in Pakistan, so it was a start up set up. Back and forth, trial and error, first time for everything- these were exciting times! I was part of something much bigger than myself. I made up my mind to channel all my energy in to my career, with zero regard for myself or anyone else, in the hope of being validated (something I had been yearning for) through achievement in the working world. Non-stop meetings and presentations, late night dinners and weekends at the office, and several flights in one day. You name it, I did it, along with a lot of white hair that had suddenly appeared on my head.

About a year in to my job my boss fell ill so I was left with a lot more responsibility than I could handle,  and I soon developed liver issues because of my skyrocketing stress levels. I had a doctor’s note advising 1 week of bed rest, but I had too much work to get on with, and no time for a break. As months went by, my lifestyle habits took a turn for the worse. I was not a smoker, but became one because I wanted to be part of the office gossip in the smokers’ corner. I took comfort in junk food. Burgers, pizzas and biryani kept me motivated to churn out more slides for my presentations. I couldn’t fathom walking up few flights of stairs to the office so any kind of exercise was out of the question. I felt sluggish and heavy but was ‘too busy’ and didn’t care enough to do anything about it. A few years in, my anxiety levels increased (probably because I hadn’t had any solid time off) which lead to significant sleeping issues and eventually insomnia. I had reached a point where I allowed my work to define me and I lost all control of myself.

After 8 years of working in Pakistan, I moved back to London to be with my boyfriend (now husband) and finally had some time and space to reflect on life. It quickly dawned upon me that I had sacrificed so many things in favour of my career over the years. Multiple family holidays and weddings, friends’ birthdays and all my relationships were put on the back burner. My perception of happiness and success had been so myopic, so absorbed in just one thing, that I had grossly neglected my own mental and physical wellbeing.

I didn’t feel confident in my body and avoided looking at myself in the mirror. Wearing loose shalwar kameez in Pakistan covered up the fact that my body was a mess and looked too old to be mine. Also, it sounds dramatic, but I felt a bit lost without my job. I couldn’t help but still involve myself in the projects I had been working on and would even dream about my life at L’Oréal. But how I was didn’t feel good. I hadn’t achieved anything apart from having a good job, and there was so much more to life than that.

My boyfriend was a fitness enthusiast so I started by drawing inspiration from him. I educated myself on basic exercises and frequented the gym a few times a week. But I wasn’t regular and had a stop-start relationship with movement because it just didn’t click with me. I felt exhausted the whole time and that it was too much effort.

It wasn’t until a whole year later that I got round to fully committing to moving my body on a consistent basis it because I was tired of making excuses. It had a lot to do with finding activities/exercises I enjoyed. This change motivated me to start incorporating healthier food choices in to my diet. Things like opting for fruit instead of processed sugars for dessert. I developed a more conscious mind-set where I thought about the decisions I was making and how they would affect how I felt about myself. Over time, and experimenting with different diets and approaches, I discovered the joy of balance and moderation. I learned that any kind of extreme/restrictive lifestyle choice was unsustainable and didn’t make me happy in the long run. I included foods I liked in a healthy way by eating smaller quantities (one or two bites to satisfy my craving instead of the whole thing), choosing healthier substitutes (dark chocolate instead of milk chocolate) and making what I ate work for me. E.g. I love pasta but eating it right before a work out because it helps maximise my performance at the gym.

I valued my health and wellbeing more than ever after I began to feel lighter, more energetic, and gratified. I finally felt confident enough to wear clothes that I hesitated to put on before because I was so conscious of my wobbly arms and thighs. It was actually an emotional moment when I watched a video of me walking in shorts on holiday- I had to do a double take to believe that they were my legs!

At some point I found myself worrying less about trying to prove or justify myself to others. I felt more inclined to let go of things I couldn’t control and picked my battles carefully. I believe stress is the most underrated ‘disease’ of the 21st century because we have normalized it so much without realising it manifests in to so many of our physical problems.

Exercise, more than anything, has helped me find inner calm, clear my head and sleep like a baby. It has been the catalyst to my positive thinking and it’s amazing what you can achieve with that. Pushing myself physically also made me realise that I’m stronger than I think, and that I’m capable of anything if I put my mind to it and work hard.

Spending quality time with friends and family is not something we necessarily associate with mental wellbeing but is so important. Making time to connect with people I love and value was so powerful and incredibly therapeutic. Strong relationships that you nourish and grow are really the bedrock of a meaningful life, now more than ever given the unprecedented times we are living through.

I was never an outdoorsy person in Pakistan because I was too busy cooped up at the office on my laptop, but that’s changed for me. There is a lot of research to support how being out in the open can have multiple health benefits which include reducing stress levels, fighting depression and anxiety, lowering blood pressure and ‘mental fatigue’. Travelling to South America where we went horseback riding and climbed Machu Picchu were instrumental moments. I felt so good and grateful to be up in the mountains, and it was after that I realised I wanted nature to play a more integral role in my life.

I strongly believe that with the right balance and mind-set it is possible to have a successful career, as well as take care of your physical and mental wellbeing. COVID-19 has forced us all to take a step back to think about how we are living and I hope we choose to move forward with our lives in a more mindful way.

It took me 8 years to recognise I needed to take a more rounded approach to life. Prioritising my mental and physical wellbeing, and making the rest of my life work around it is the best thing I’ve ever done. My insta blog, ‘absolutelyaale’ (now ‘happytogethealthy’) came about because I wanted to share my journey to becoming a happier and healthier version of myself in the hope of inspiring others. I then decided to formalize my passion for wellness by training as an Integrative Nutrition Health Coach to help other South Asian women make positive changes to their health in a sustainable and holistic way. I’ve come so far from the girl who was stuck in her own paradigm and couldn’t see the bigger picture, and I’m more motivated than ever to keep going to better myself and others.

With so much love,

NextFIVE WAYS TO BE KIND TO YOURSELF AND OTHERSNext