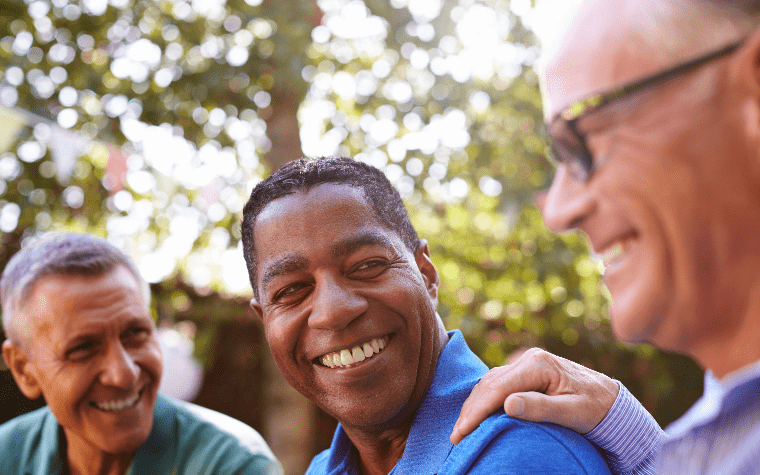 MEN HAVE HORMONES, TOO: THE IMPORTANCE OF TESTOSTERONE IN HEALTH AND WELL-BEING

When you hear “hormone health,” you may automatically think of the cyclical nature of women’s hormones and the many health issues that stem from hormonal imbalances. Men have hormones, too, and it’s important to include men in the discussion around proper hormonal health and preventing hormonal imbalances. While symptoms and consequences are not as varied, there’s much value in talking about men’s hormonal health and overall well-being.

Testosterone, the dominant hormone in men, is produced in the testes, but the hormone cascade starts in the brain. The pituitary gland and the hypothalamus are major glands that control hormone production, and in men, they control the production of testosterone and sperm. The hypothalamus releases a hormone called gonadotropin-releasing hormone (GnRH), which in turn stimulates the pituitary gland to release follicle-stimulating hormone (FSH) and luteinizing hormone (LH). These two messenger hormones are responsible for telling the testes to produce sperm and testosterone, respectively.

Testosterone is mainly responsible for:

In contrast to the female hormone cycle that fluctuates over a 28-day cycle, male testosterone levels fluctuate on a 24-hour cycle, meaning hormone levels dip and rise regularly every single day. Normally, testosterone production is highest in the morning, plateaus in the afternoon, and falls in the evening to late-night hours.

Testosterone isn’t just involved in sexual performance and the reproductive system. It also plays an important role in the actual structure of the brain as well as cognitive ability and overall mental health.

Structure of the male brain

The structure of the male brain may give insight into behavior and cognition. The male brain is larger by volume than the female brain. The larger size – while minimal – impacts the amount of gray and white matter in the brain and in turn may impact the strength and function of communication between the two brain hemispheres as well as between the lobes or regions of the brain.

Testosterone has a direct impact on learning and memory as receptors to metabolize testosterone are found on the learning and memory centers of the brain, the hippocampus and amygdala. Testosterone has neuroprotective qualities and has been shown to increase concentrations of nerve growth factor (NGF), a protein responsible for the development of sensory neurons; protect against oxidative stress, which could lead to age-related cognitive decline; and potentially prevent Alzheimer’s disease by preventing amyloid plaque buildup, a hallmark of the condition. This may explain why women are more likely to develop Alzheimer’s disease than men.

When it comes to cognitive ability, a 2014 study from the University of Pennsylvania sought to demonstrate that there are clear differences in how areas of the brain communicate with one another. Indeed, researchers found that in male brains there is greater neural connectivity from front to back, “suggesting their brains are structured to facilitate connectivity between perception and coordinated action.” In females, “the wiring goes between the left and right hemispheres, suggesting that they facilitate communication between the analytical and intuition.”

This information is especially important as it helps shape future research on “neuropsychiatric disorders [such as depression, autism, and schizophrenia], which are often sex related.”

Men typically experience a gradual decline of testosterone as they age – starting around ages 40–50 – unlike women who experience perimenopause and menopause, during which hormones drop precipitously over a short period of time. This gradual decline in men can make pinpointing low testosterone as the main culprit for any or all of the below symptoms difficult as there are many external factors that can contribute to these general ailments.

When testosterone is lower than normal – whether one is aging or not – possible mental health symptoms include:

There is little research that conclusively states that low testosterone increases the risk for mental health disorders, but some studies have shown correlations between testosterone levels and impaired mental health behavior, such as symptoms of anxiety and depression.

In one study, researchers hypothesized that men with borderline testosterone levels would have higher rates of depression and depressive symptoms. They concluded that while the rate of experiencing such symptoms was significantly higher than the general population, this cohort also had high rates of obesity and physical inactivity. Those who are obese or overweight will likely have increased circulating cortisol, known as the “stress hormone,” due to chronic inflammation, which also impacts behavior and mental health. Low testosterone may also impact the production of the hormone serotonin, which regulates mood.

As you can see, it’s important to look at the full picture of someone’s health when discussing hormonal health!

How testosterone impacts well-being and longevity

While testosterone has neuroprotective qualities, this hormone may not play such a protective role in the immune system. Men have a harder time fighting off infection as testosterone suppresses inflammation. X chromosomes carry proteins that manage immune response, and it’s hypothesized that because women have two X chromosomes (while men have only one), the female immune response is stronger. Higher testosterone levels are also implicated in higher risks of cancer, such as prostate cancer.

When it comes to longevity, life expectancy for men is shorter than for women. Testosterone may increase the risk for cardiovascular problems, leading to fatal cardiovascular events, especially with older age. Men also tend to engage in more risky, life-threatening behavior, which could contribute to the difference in life expectancy. Research is limited in exactly how testosterone shortens life span, but it could be that female hormones offer much more protective benefit than testosterone.

Because testosterone is involved in many bodily functions and processes, lower than normal testosterone levels can have physical effects on the body in addition to mental and emotional effects.

Physical symptoms of low testosterone include:

Just as the mental and emotional symptoms of low testosterone can be attributed to external diet and lifestyle factors, physical symptoms can, too. For proper hormonal balance, it’s key for men to focus on engaging in healthy lifestyle behaviors, such as exercising, not smoking, not drinking excessively, and fostering positive relationships, as well as eating a balanced diet focused on whole foods.

Health Coaches help their clients reach their health goals by providing support and accountability. They facilitate dialogue with their clients around how bio-individuality is at the root of understanding their unique body and health needs, which can include how their hormones are impacted by the foods they eat and the behaviors they engage in.

Because the health and wellness space may feel and look predominantly female, it’s even more important to engage men in these conversations around health, and especially hormonal health, as it doesn’t just affect women. Health Coaches are the perfect facilitators for these conversations; they help create a supportive environment where men can discuss their health concerns and goals.

Men also want to feel confident in their bodies, increase their energy, and enhance their mental well-being. Understanding how the body works and how to optimize health through diet and lifestyle is incredibly empowering, and something that men should have the opportunity to achieve by becoming or working with a Health Coach.

Curious about how you can impact your community in a healthy way? Click here to learn more about our Health Coach Training Program.

PrevPreviousFIVE WAYS TO BE KIND TO YOURSELF AND OTHERS
NextOPTIMIZE YOUR BRAIN HEALTH: FIVE PHYSICAL, MENTAL, AND LIFESTYLE TIPS FOR A HEALTHY BRAINNext